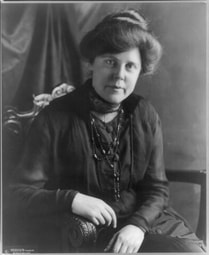 Lucy Burns was born in 1879 in New York City, the fourth in a family of eight children.  Fortunately for Burns, her father believed in educating children of both sexes. She graduated from Vassar College in Poughkeepsie, New York in 1902. Over the next seven years she did graduate work in linguistics, first at Yale University (while teaching English at Erasmus Hall in Brooklyn) and then at Universities in Berlin, Bonn, and Oxford.

Her time in England inspired her interest in securing the right for women to vote, and she left school shortly after to pursue this passion. After several brave arrests and prison hunger strikes, Burns received a medal from Pankhursts’ Women’s Social and Political Union.  In 1912 she returned to the United States and continued the suffrage fight alongside well-known activist Alice Paul. In 1913 Burns and Paul formed the Congressional Union for Woman Suffrage, which was succeeded three years later by the National Woman’s Party. Burns edited The Suffragist, helped organize political campaigns, and spent time in jail for infractions ranging from covering Washington, D.C. sidewalks with chalked suffragist messages to organize a demonstration against President Woodrow Wilson during World War I.
​
After the ratification of the long-sought 19th Amendment on August 26, 1920, Burns retreated from political activism and never returned to the fray. She moved back to Brooklyn to live with two unmarried sisters and went on to raise her newborn niece who had been left motherless in 1923 when her youngest sister died in childbirth. A devout Roman Catholic, Burns took solace in her faith and died in 1966 after a long decline.  The Lucy Burns Museum, commemorating the women’s suffrage movement and the history of the Occoquan Workhouse (prison) where Burns and other suffragists were confined in 1917, opened in 2020.  The museum is in Lorton, Virginia, on the same site as the former prison. 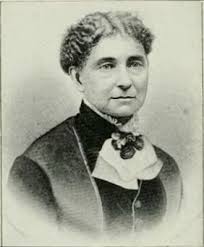 Amelia Jenks Bloomer is well known for advocating for women’s right to wear trousers, but her involvement in the fight for equal status for women is much more than a shift in dress norms.

Born in 1818, Ms. Bloomer became active in politics shortly after getting married and moving from Homer, NY, to Seneca Falls, NY, in 1848. She formed the first Ladies Temperance Society,  and began attending women’s rights meetings, including the first public Women’s Rights Convention in Seneca Falls. Amelia advocated for equal rights in employment, property ownership, education, and more, while also speaking out against slavery.

When Amelia’s husband became the local Postmaster, he appointed Amelia his assistant - making her the first female to occupy the position. Amelia used this opportunity to bring more women into the workplace, and to grow her female-focused newspaper, The Lily.

The Lily published articles written by Amelia and other important leaders in the women’s rights movement, including Elizabeth Cady Stanton, with a focus on education and encouragement toward social reform. It became a forum for over 6,000 readers to share ideas and experiences in a way no other publication allowed. Such an opportunity for expression and communication helped galvanize a wide range of women toward the common cause of progress for women in America, becoming a model for other suffragist publications.

After moving to Iowa in 1855, the Bloomers established the first public school system, as well as a library. Boys and girls were educated together, and Amelia insisted on equal pay for female teachers (who would normally receive about 30% lower pay). Again, she organized the first local Temperance Society and spoke publicly about women’s rights, was elected as a vice-president of the National Women’s Suffrage Association in New York City(1867), and represented Iowa at the American Equal Rights Association meeting in New York City(1869). She then became the first president of the Council Bluffs, Iowa, suffrage society in 1870. Amelia Bloomer lived to see the early fruit of the suffragists’ ongoing fight when women won the vote in Colorado in 1893. She passed away the following year, at the age of 76. 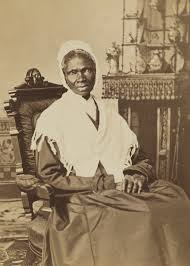 Sojourner Truth was born in Ulster County, New York in 1797 as a slave. She was bought and sold four times under her given name, Isabella Bomfree. A year before New York’s law that would free slaves went into effect (1827), she ran away with her infant to a nearby abolitionist family that bought her freedom.

In 1828 she moved to New York City where she worked for a minister and in the 1830's she began to participate in religious revivals. She later declared in 1843 that the Spirit called on her to begin preaching and renamed herself Sojourner Truth.

Truth began a lecture tour in 1851 where she delivered her “Ain’t I a Woman?” speech that challenged racial and gender inferiority and inequality. A few years after that she settled in Battle Creek, Michigan, but continued to speak nationally and help slaves escape to freedom. During the Civil War, she urged young men to join the Union and she helped organize supplies for black troops that fought.

​Because of her work in the war she received an invitation to meet President Lincoln in 1864, and while she was there she got involved in the Freedman’s Bureau to help freed slaves build new lives. She also protested against segregation while in DC. She spent her final years back in her home in Michigan, where she died in 1883. 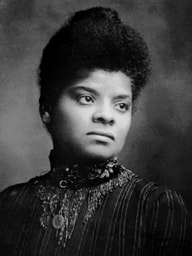 Ida B. Wells was born into slavery in Holly Springs, Mississippi on July 16th, 1862. She was the oldest daughter of James and Lizzie Wells. At 16 she lost both of her parents and one of his siblings to the yellow fever outbreak.  She dropped out of Rust College and eventually moved with her sisters to live with an aunt in Tennessee, where she continued her education at Fisk University.

In 1884, there was an incident on a train where the train crew forced her to move to the African American car, even though she had a first class ticket. She sued the railroad and won. After that she became a journalist and started writing about the issue of race and politics. Eventually, she became an owner of The Memphis Speech and Headlight and Free Speech.

After she saw a friend get murdered she put all her attention on ant-lynching. She wrote articles about lynching and went to the south to gather information.  The anti-lynching campaign went to the White House so President McKinley can make a reform.

Wells married editor Ferdinand Barnett in 1895, and they went on to have four children. She continued to actively fight for suffrage, focusing especially on supporting black women. She founded several civil rights movements including the National Association for Colored Women and the Alpha Suffrage Club in Chicago, which played a crucial role in victory of women's suffrage. She died March 25th, 1931, leaving a legacy of social and political activism.

Emmeline Pankhurst was born Emmeline Goulden in Moss Side, Manchester, England, on either July 14 or 15, 1858.  There is some mild dispute as to which date is correct as her birth certificate was not signed and registered until she was four months-old.  Though, officially, it lists "14 July, 1858," which was the sixty-ninth anniversary of Bastille Day.  The acknowledged start of the French Revolution!  Considering how she led a parallel fight for women's suffrage, she might have considered it an appropriate date for celebrating her birthday.  So, she always verbally gave the fourteenth as her date of birth.

Her mother nee Sophia Jane Craine, was from the parish of Lonan on the Isle of Man in the Irish Sea, where her parents owned and operated one or two boarding houses.  It is at one of these houses that Sophia first met her future husband, manufacturing representative Robert Goulden of Manchester.  The former marrying the latter at age twenty.

Emmeline herself was roughly the same age when she married attorney Richard Pankhurst, who was not only a friend of Utilitarian philosopher John Stuart Mill.  But, also, the author of the Women's Suffrage Bill (circa late 1860's) and the Married Women's Property Acts of 1870 and 1882, respectively. They became the parents of Christabel Pankhurst on Sept. 22, 1880.  The young woman, herself, becoming a militant feminist when she and fellow suffragette, Annie Kenney, disrupted a British Liberal Party meeting in 1905 (two years after her mother founded the Women's Political and Socialist Union).  Leading to their arrest and subsequent imprisonment when they refused to pay fines for disturbing the peace!

Emmeline was one month shy of her seventieth birthday when passed away on June 14, 1928.  A few weeks later,  Parliament passed the Representation of the People Act into law.  Giving full political equality to English men and women, alike. 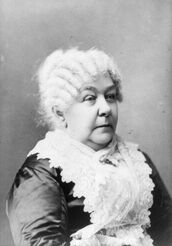 She was born in Johnstown, New York, on November 12, 1815, to Daniel and Margaret (nee Livingston) Cady, the town's most prominent citizens.  In addition to a formal education at both the Johnstown Academy and Emma Willard's Troy Female Seminary, she received an informal legal education from her attorney-father.   And when she married abolitionist lecturer Henry Stanton in 1840, they decided to spend their honeymoon in London, where an international anti-slavery convention was being held.  Unfortunately, women were not allowed to attend any of the meetings, which angered both Elizabeth and her fellow abolitionist, Lucretia Mott.

Eight years later, they held a convention dedicated purely to women's rights at Seneca Falls, New York.  There had been a similar convention, eleven years earlier, that had discussed the rights of African-American women.  But, that was seen as part of the struggle to abolish slavery as a whole.  So, the 1848 convention is usually credited with being the first such feminist gathering in the United States. Especially, as it led to the publication of The Declaration of Sentiments (sort of a suffragist codicil to the Declaration of Independence).

By the time Elizabeth had given birth to her seventh child, she was writing speeches for fellow feminist Susan B. Anthony, whom she had first met in 1851. The two of them founded the American Equal Rights Association in 1866.  But, due to their opposition to the passing of the 14th and 15th Amendments of the U.S. Constitution (due to only African-American _men_ being granted the right to vote, thereby), a schism was created between themselves and other suffragists.  This, in turn, led to their creation of the National Woman Suffrage Association in 1869.  The two organizations not reconciling until 1890, when they merged together as the National American Women's Suffrage Association.

By her sixties, Elizabeth had become more of a desk-bound author than a traveling lecturer.  But, this did not make her writing less prolific!  For example, she co-authored, along with Susan B. Anthony and Joslyn Gage, the first three volumes in THE HISTORY OF WOMAN SUFFRAGE (1881-85).  Then, in 1895, she and a committee of fellow feminists published THE WOMEN'S BIBLE which pointed out how several instances of misogynistic bias within The Good Book.

She passed away, however, on October 26, 1902 at the age of eighty-seven.  Just seventeen years and ten months before women finally achieved the right to vote with the ratification of the 19th Amendment. 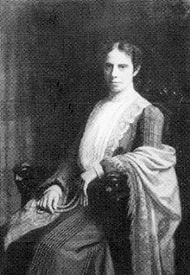 Alice Stone Blackwell was born in Orange, New Jersey on September 14th, 1857, to Lucy Stone and Harry Blackwell. Her family later moved to Dorchester, Massachusetts.  Her family was involved in the feminist movement during her childhood. She graduated in 1881 with honors from Boston University in Massachusetts.

After graduating she immediately joined the editorial staff of the Woman’s Journal.  She served as the recording secretary for the National Woman’s Suffrage Association from 1890-1918; and from 1887-1905 she edited and distributed the “Woman’s Column,” a periodical collection of suffrage news articles, to newspapers across the country.

She was also active in some various groups such as the Women's Christian Temperature Union, The Women's Trade Union League, The National Association for the Adventures of Colored People, the American Peace Prize Society. She was also the founder of the Massachusetts League of Women Voters. Right up until her death she remained the last exponent of 19th century style of New England radicalism. She died in Cambridge, Massachusetts on March 15th 1950.