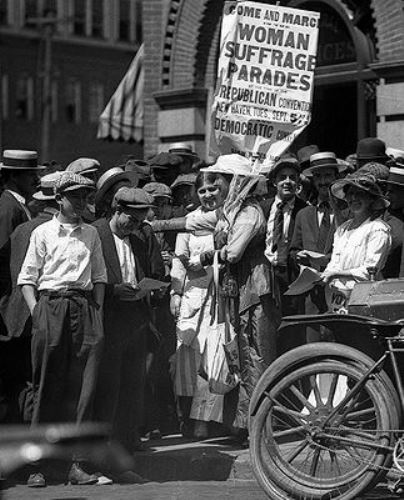 Connecticut Suffragists, 1919 - Connecticut State Library
CT women were very active in the Suffrage movement, both at a state and national level. While we have many esteemed women to thank for their involvement, at a state level, the most notable was Hartford resident Frances Ellen Burr.

In 1853, a 22-year old Burr attended the Women’s Rights Convention in Cleveland, OH. Returning home with a passion for suffrage, she became one of the first organizers of feminist activity in CT. In 1867 Burr petitioned the CT General Assembly to consider a bill that would grant women the right to vote. Her presentation was well-received, but the bill did not pass the House. Despite the fact that her effort was not successful, it sparked a greater interest in suffrage and prompted increased activism within her home state.

In 1869, the first CT suffrage convention was held. Attended by prominent community leaders including Harriet Beecher Stowe and addressed by influential suffragists such as Susan B. Anthony and Elizabeth Cady Stanton, this event marked the birth of the Connecticut Woman Suffrage Association. Ms. Burr held the role of Recording Secretary of the CWSA for 41 years, keeping handwritten records until 1910 as well as assembling scrapbooks (currently on file at the CT State Library). Her leadership, service and influence was a key component to this important organization’s success and staying power. The CWSA was active and vital in working toward local as well as national suffrage until 1921, and though the early 1900’s saw decreased involvement, by 1917 it boasted a membership of 32,000 residents. This was due in part to the reinvigorated efforts of a new generation of leaders, hosting outreaches such as a month-long automobile tour of Litchfield County in the summer of 1911 and CT’s first suffrage parade in Hartford in 1914 . Though she no longer served in CWSA leadership at that time, Burr’s inspiration and dedication had been essential to the group’s longevity, focus, and vision. Through her early activism, her involvement in the CWSA, and her work as a writer, speaker, stenographer, reporter and journalist, Burr’s impact and influence on the cause of suffrage in the state of CT was unparalleled.  She passed away in 1923 at the age of 92, having lived long enough to see her dream realized.

Many CT women were also involved in promoting suffrage on a national level.  Alice Paul, a part-time Ridgefield resident for many years, was a key force in the suffrage movement in Washington DC. Paul founded the National Woman’s Party in 1916 and was the leader of the “Silent Sentinels”, a group of women who picketed the White House. Though she had led picketing events as early as 1913, the campaign took on a new force in 1917. Paul’s “Sentinels” picketed the White House six days a week between 1917-1919. Nearly 2,000 women participated in these demonstrations, and many were arrested and imprisoned for their activities. Paul herself was imprisoned as well, facing brutal treatment prior to her eventual release.

A total of 14 CT suffragists were imprisoned for picketing during this time, and many more were active in other parts of the movement. Of particular note is the involvement of the Hill family of Norwalk. Daughters of CT Congressman Ebenezer Hill (who had served as a ranking member of the House Ways and Means Committee), Helena Hill Weed, Clara Hill, and Elsie Hill were professional, educated women who were deeply involved in leadership in organizations such as the Congressional Union of Women’s Suffrage, the Daughters of the American Revolution, and the Women’s National Press Club. They were active participants in suffrage demonstrations and were jailed multiple times while part of this movement. An activist in her own right, their mother Mary E. Hill had been influential in helping the National American Woman Suffrage Association and Alice Paul (then co-chair of NAWSA’s Congressional Committee) obtain the desired permission to hold the famous 1913 “Women’s Suffrage Procession” in Washington, DC.  According to Paul, the group had not been given permission to march down Pennsylvania Ave. as initially requested.  Mrs. Hill went to see the Chief of Police, and subsequently they were granted their permit.