Informational Brochure about the Library! 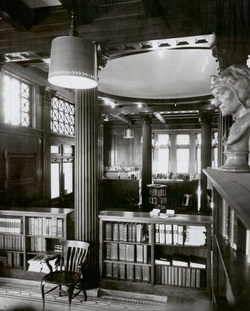 Reference and Reading Room Circa 1970
On October 10, 1864, a small group of Torrington men gathered together with the intention of doing something worthwhile for the community.  The men included Rev. D.P. Sanford, Rev. W.S. Adamson, Rev. J. Vinton, Lauren Wetmore, Charles F. Brooker, and J.F.Calhoun. During this meeting, the men formed two groups.  One group was to present an organized plan about forming a library (which included Sanford, Adamson and Vinton). The second group (comprised of Wetmore, Brooker, and Calhoun) was to solicit subscriptions for library membership.

On October 27th of the same year, the men formed the Wolcottville Library Association with only $700.00 to fund the organization.  Library dues for all residents at the time were $2.00 per year.  There were approximately 2,200 people in Wolcottville.

The first Board of Trustees president was Gideon Welch and the first librarian was Alexa Eggleston.

In 1865 the Wolcottville Library Association found its first home in the Granite Block area of downtown.  The rooms once belonged to Attorney Walter Holcomb.  Mrs. Frank Holley recalled in a 1939 newspaper article,

“I remember in the early seventies (1870s) that the library was located in the Granite block.  Up a long broad pair of stairs in center front of the block across a narrow dark hallway into a large reading room, rather plain (not much furniture in those days), newspapers fastened against the wall and through a door on the west side of this reading room we came into another room long and narrow and behold the library proper with Mrs. Woodriff behind the desk or long counter” (Register Citizen Newspaper, October 10, 1939).

The first books were donated by a group of women who met to read and discuss current literature of the time.  They gifted the books that they had previously read to the new library.  The first newspaper the library subscribed to was the New York Tribune.

Many of the first Library donors of the day were thankful citizens.  Some included the local baseball club, who gave $3.00 and the Young Ladies’ Musical Association, who donated $40.00.  The library also had the support of budding businesses, including the Coe Brass Manufacturing Company, who donated $100.00 and the Excelsior Needle Company, who donated $50.00.  Both were considered generous donations, given that the companies were also just becoming established.

In 1876, the library came under financial distress.  Money was owed to Mr. Gideon Welch, who had been donating money for supplies and everyday expenses, in the sum of $19.63, so the Trustees took up a collection.  The following members made up the difference: Mr. Wetmore, James Alldis (the president of the Association at the time), O.R. Fyler, C.F. Brooker, the Brooks Brothers and Mr. Elisha Turner, who added to his $5.00 exactly 62 cents so that the library could start the New Year without a balance. As of January 1880 the library was without debt for the first time in its history.

In June of 1880, the Library again moved locations to the old wooden Congregational Church (the old Wetmore School), purchased by Lauren Wetmore.  Mr. Wetmore offered the lower front floor to the library at the same rent they had paid in the previous location if they would reduce the membership fee to $1.00 in order to increase public interest.  In that one year, membership more than doubled.

A second floor was constructed to the building, able to house four tenement apartments, with the library below.  The building would later become known as the old Wetmore School.  It was named such because Lauren Wetmore bought the building from the church in 1880.  He was the library’s landlord for many years, with provision. The first provision was that the library pay no rent and the second was that the library collect the rent money from the tenements above and keep the funds for library use.

In 1881 the Wolcottville Library officially changed its name to the Torrington Library.   More secure forms of funding became necessary to maintain the library.  At the Annual Meeting that year, Dr. St. John made this proposition, “I propose to be one of the eight to raise $200 for the library” (Register Citizen Newspaper, October 11, 1939).  The meeting was adjourned, but the proposal was not forgotten.  Four individuals were willing to raise the funds needed and another gave $100 to make up the difference, amounting in $1600, which was used to purchase books.

At the end of the Annual Meeting in 1885, Lauren Wetmore said, “I have no fears for the future.  I would say make use of this hall and the fixtures as it is and the greater use you can make of it the better I shall be pleased.  This institution can go on with increased vigor.  One man cannot do everything but united we can do everything necessary to insure success” (Register Citizen Newspaper, October 11, 1939).

A New Library on Litchfield Street

The library remained in Wetmore’s building until 1901. During that time, many individuals helped the library stay in good financial standing. Lyman W. Coe helped in monetary emergencies; Elisha Turner paid to put in sidewalks and other repairs; and the Torrington Electric Light Company installed fixtures and sent electricity free of charge. Wetmore also donated $20,000 in cash and property to ensure the building’s success, and to create a fund to reduce membership fees.

Sadly, Mr. Wetmore died February 2, 1890 at the age of 89. Mr. Wetmore made provisions in his will that his property be transferred to the association upon his death.  After the death of his wife in 1898, four men (Isaac W. Brooks, Orsamus R. Fyler, Gideon H. Welch, and James Alldis) received in trust for the library $25,000 from Mr. Wetmore’s estate.

The new library body was prospering, much to the active involvement of the Trustees, especially Mr. Elisha Turner, who had become President of the Board of Trustees in 1884 and served as such until his death in 1900.

During Turner’s presidency, construction began on what is now the current home of the library on Litchfield Street (and now Daycoeton Place). The vast, marble structure was paid for entirely by Turner’s gift of $100,000.  The land was also gifted to the library and was the former location of Lyman W. Coe’s carriage house.

Earnest Greene, an architect from New York, was hired to draw the plans and H. Wales Lines Co., of Meriden and the Hotchkiss Brothers Co., of Torrington were the contractors.

Sadly, Turner did not live to see the building finished. Elisha Turner died September 14, 1900. The new building was dedicated on September 11, 1901, almost one year to the day after Mr. Turner’s death.  Upon his death, Mr. Isaac W. Brooks became President of the Board.

At the dedication ceremony, Yale professor Bernadotte Perrin said, “A Library in a community is a fountain of ennobling influence.  A memorial such as the one left by Mr. Turner will live forever and this community will have long memory for Lauren Wetmore and Elisha Turner.”

During the dedication, Judge Gideon H. Welch spoke of Lyman W. Coe who along with Turner and Wetmore played an key role in financially supporting the library.  Welch also spoke of all past benefactors, saying, “I would that I could allude to them all by name and speak of their noble liberality.  Especially would I be gratified to speak of the royal generosity to this association of the late Lyman W. Coe whose benefactions during his lifetime were so widely and wisely distributed” (Register Citizen Newspaper, October 12, 1939).

With Turner and Wetmore gone, two strong advocates for the library were no longer involved in the day-to-day operations of the organization. However, both left funds to ensure the library’s financial stability.  When invested, Welch estimated that the funds would draw and income of around $2,500 per year; a great financial assistance to the young organization.

Mr. Welch succeeded Mr. Isaac W. Brook as President of the Library and held the position for a second time until his death in 1927 at the age of 83.  Judge Welch continued the legacy left by previous trustees, and left a bequest to the library.

In 1926, Ella Coe and her sister, Adelaide Eliza Coe Godfrey, both daughters of Lyman W. Coe, donated the money to build the children's room.  They purchased the land from Mr. Sickmund's and so began construction.  In 1928, Ella Coe also donated the money to redecorate and acquire new display cases for the Turner Museum.  Along with it, she donated a good majority of her family glassware to the library collection.

In 1935, the L.W. Steele Women’s Relief Corps celebrated the libraries 50th anniversary by donating the bronze relief of Abraham Lincoln with the Gettysburg address below the bust.  It was originally placed in the Children’s Room and can be seem near the Daycoeton Place entrance before the stairs to the second floor balcony.

Philanthropy did not end there. The Brooks brothers, of the Brooks Brother’s Bank and Trust, also took an invested interest in the Library, serving on the Board of Trustees since 1864.   John N. Brooks took the role of President in 1936 after the death of Edward H. Hotchkiss, and his son John H. Brooks served as President until the time of his death in 1998.

In 1970, substantial renovations were made to the library building to provide stack space, air conditioning and modern lighting.

After the death of John H. Brooks in 1998, Charles W. Roraback assumed the presidency and currently holds the position.  In 1998 Susan R. Carroll became the first female Trustee in the history of the Library.

In May of 2008, the Turner Museum reopened as the new Program Room, hosting approximately 100 events a year in the space, giving patrons the opportunity to rediscover the artifacts housed in the museum.

In February of 2009, the marble tiled floor (which was carpeted over in 1970) was uncovered to reveal the beautifully colored mosaic pattern throughout the reading and reference rooms.

Benefactors have been generous over the years and have always seemed to remember the library, a place many called a refuge and second home.

The Torrington Library is a doorway to learning  and a life-long partner to the community, providing free access to resources  including  a circulating collection of both print and non-print adult, young  adult, and juvenile materials.  With new materials added daily, the Library  serves a community of over 36,000 with a dedicated staff of 18 and countless volunteers.

Throughout its history, the library has developed into a learning center for the people of Torrington and Litchfield County.  The library currently provides its patrons with a substantial print collection, access to computers, free Wi-Fi, DVDs, audio books and musical CDs, various electronic databases, a dynamic and information website, free and education programming for children, teens and adults, and most recently, an increasing number of eBooks and audio books that patrons can download from the comfort of home.

The library has truly evolved into a destination for literature, learning, arts, culture, history, technology and so much more.

The Torrington Library celebrated its 150th Anniversary on October 10, 2014.

On April 15, 2015, the Torrington Library’s Board of Trustees voted to move forward with an estimated $5.7 million dollar building project. The scope of the project included a renovation of the existing structure as well as a three level, 13,377 square foot L-shaped addition on the west and north sides of the building, increasing the total building size to 30,853 square feet.

The architect for the project was Peter Wells of Tuthill and Wells Architects, LLC. The general contractor was Burlington Construction.

The newly renovated library opened on December 5, 2016 after 18 months of construction.

The library continues to look to the future, while embracing the generosity of past benefactors and respecting the overall mission of the library: Engaging all members of community to providing equal access to books, electronic resources, programs, and partnerships to enrich and empower lives.